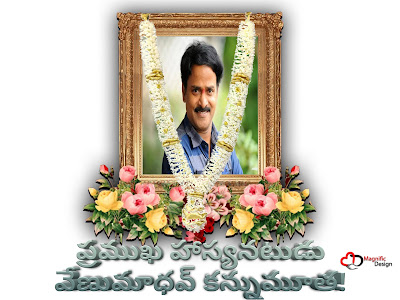 One of the most famous comedy actor Venu Madhav passed away in Hyderabad.He breathed his last at 12.21pm at Yashoda hospital in Secunderabad. Both the family members and doctors confirmed it. May his Soul Rest in Peace. We have earlier reported about Venu Madhav admitted in hospital due to multiple organ failure. Now his death has been confirmed and we from TheNewsCrunch offer our condolences to him and his fans.

Hon'ble Chief Minister Sri K. Chandrashekar Rao has expressed shock over the sad demise of noted Telugu actor and mimicry artist Sri Venumadhav. CM recalled that Venumadhav had a great following due to his acting skills. In a message CM has conveyed deep condolences to the family members of Venumadhav and prayed the almighty for his soul to rest in peace.
RIP
Share
Tweet
Pin
Send
Share