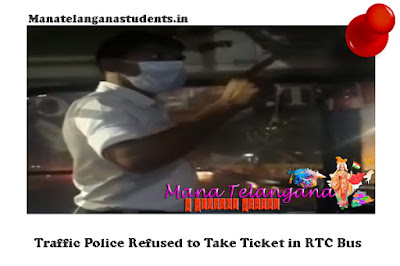 In hyderabad city a traffic police man refused to take ticket in RTC bus, he was argue with conductor and warned for asking money for ticket stating that he would take the conductor to police station and assault him. As the passengers asked the policeman to get down from bus or take ticket.

The traffic police man got in to the bus at Lakdikapul to travel to Koti. As the bus reached Ravindra Bharathi bus stop the constable was get down from bus because of passengers demond to take ticket.

This incident was shot by one of passenger and he was posted into social media it goes viral. But as the police said that they did not receive any complaint on the issue.