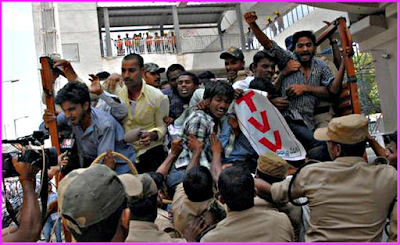 The students belonging to Telangana Vidyarthi Vedika (TVV) staged a dharna and burnt an effigy of Central government at the premises of NG College in the town on Friday demanding action against the two Union Ministers and Vice-Chancellor of University of Hyderabad (UoH) who were allegedly responsible for the suicide of research scholar Rohith Vemula. The protesting students raised slogans against the Union government for its silence and inaction.

Speaking on the occasion, TVV district vice-president M Aravind demanded the removal of Union Ministers Bandaru Dattatreya and Smriti Irani from the Union cabinet for their role in abetting the suicide of the Dalit research scholar. In addition to this, stringent action would be taken against Vice-Chancellor Appa Rao to prevent such unfortunate incidents from taking place in the future, he added. Aravind said that the suspension of the Dalit students should also be revoked without any conditions.

He also condemned the arrest of the members of Telangana Youth League (TYL) who tried to lay seize to Raj Bhavan in Hyderabad protesting against the suicide of Rohith. In Nakrekal, the members of Progressive Democratic Students Union (PDSU) and Progressive Youth League (PYL) also took out a protest rally demanding action against those who were responsible for suicide of the research scholar. They also burnt the effigy of the Central government in front of Vasavi Junior College in the town.

PDSU divisional secretary Praveen said that it was highly unfortunate that caste discrimination still exists in the institutes of higher learning like the University of Hyderabad. He lashed out at Union Ministers Bandaru Dattatreya and Smriti Irani and university Vice-Chancellor for their role in the sordid episode. District PYL secretary Satish and others also took part in the protest demonstration.
Bandh Central Government Education PDSU Recent Telangana Students TVV
Share
Tweet
Pin
Send
Share