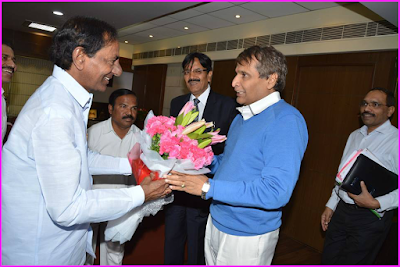 Telangana government on Friday requested the Railway Ministry for extending rail network to the pilgrim centre of Yadagirigutta (Yadadri) in Nalgonda district of the state, as part of the ongoing phase-II works of Multi Modal Transportation System (MMTS).

The Telangana government also offered to bear two-thirds of the estimated project worth Rs. 330 crore.

In a letter addressed to Railways Minister Suresh Prabhu, Telangana Chief Minister K Chandrashekhar Rao requested him to include extension of MMTS services from Ghatkesar to Raigir (Yadadri) on a cost sharing basis (state government will bear two-thirds of the cost and the railways the rest) in the Railway budget for the year 2016-17.

Chief Minister informed that the government of Telangana is in the process of developing Yadadri, a holy hill shrine located at about 60 km from Hyderabad, as a mega pilgrimage and spiritual hub.

The Chief Minister mentioned that the government has acquired more than 2,000 acres of land for developing the whole area on the lines of Tirupati with very good amenities for the devotees, an official release said.

Explaining the need for extension of MMTS, the Chief Minister wrote that, Yadadri temple has a railway line passing nearby with a halt station called Raigir on Secunderabad - Kazipet Section.

Mr Rao said that the MMTS services in and around Hyderabad city have become very popular and currently phase-II of MMTS is under implementation.

One of the stretches of MMTS phase-II is between Secunderabad station and Ghatkesar (21 KM) and this is expected to be completed in financial year 2016-17.

The phase-II MMTS can further be extended from Ghatkesar to Raigir (32 KM) by laying a third Railway line with attendant signaling works etc. and Raigir station can be renamed and developed as 'Yadadri' station, the release said.