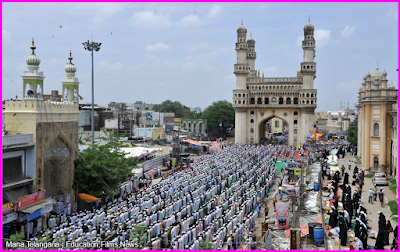 The Telangana government has allocated Rs. 26 crore for celebrations during the Muslim holy month of Ramadan.

Making the announcement in Hyderabad on Thursday, Chief Minister K Chandrasekhar Rao said the money would be spent on organising iftar dinners in mosques, distribution of clothes among the poor and payment of honorarium to imams and muezzins.

He said the government will host 'dawat-e-iftar' on a massive scale at the Nizam College Grounds here on July 8.

Ambassadors of Saudi Arabia, Turkey, Iran and Indonesia will be invited for the dinner.

Similar dinners will be organised in 100 mosques in Hyderabad and one mosque in each assembly constituency across the state. Food will be arranged for 1,000 people at each mosques.

KCR, as the chief minister is popularly known, said clothes worth Rs.9.75 crore will be distributed among 1.95 lakh poor Muslim families to enable them to celebrate Eid.

Another Rs.4 crore will be spent to arrange food for these families.

The chief minister also announced that the government will pay Rs.1,000 per month to each imam and muezzin of 5,000 mosques in the state.

The government will also arrange food in orphanages at a cost of Rs.25 lakh on July 8.

A committee headed by Deputy Inspector General of Police A K Khan has been constituted to supervise arrangements for the main event in Hyderabad. Deputy Chief Minister Mahmood Ali will review the arrangements.