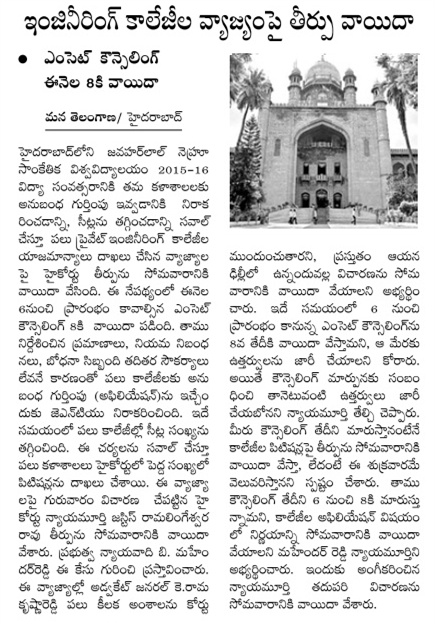 The private engineering colleges moved the High Court over the disparity in affiliations accorded by Jawaharlal Nehru Technological University-Hyderabad (JNTU-H). Reddy said the engineering and pharmacy aspirants can exercise their choice of colleges online from July 8 to 11 and they can alter their frozen options on July 12. The seats would be allotted to the candidates on July 15.

The seat allotment for the candidates who participate in the second phase counselling would be done on July 28 and candidates have to report to their respective colleges’ between July 29 and 31. As per the Supreme Court ruling, the classes will begin from August 1, the TSCHE Chairman said. JNTU-H in-charge Vice-Chancellor Shailaja Ramaiyer asserted that the inspections in the private engineering colleges have been done as per the All India Council for Technical Education, JNTU norms in a transparent way.

She said the university had formed fact finding teams with senior professors for inspecting the colleges and based on the report, the colleges have been communicated with the deficiencies and number of courses that were disaffiliated. “Information with regards to inspection of colleges, affiliation, and infrastructure has been placed on the university website in a simplified form.

Students can access to the information before joining a college,” she informed. Ramaiyer said the university stressed on the faculty and laboratories during the inspections. “Where there is no equipment in the labs for the second semester, we have given conditional clearance that the colleges should make up till the end of first semester,” she informed. The university would try to advance the process of affiliation from the next academic year, she said