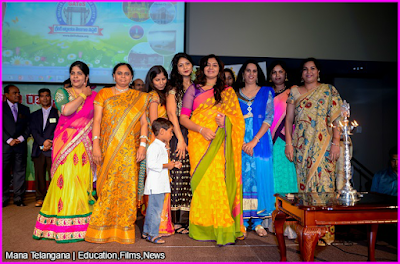 The event was a great success and over 1,500 attendees well enjoyed. They were awe-stuck and spell bound for almost seven continuous hours. The event started at 5:10 pm. As people started porting in, the show continued and the Hall was full even at 11:30 pm.

For the first time in Atlanta, an evening event pulled 1,500+ participants and receiving praises from all that attended.

Viju Chiluveru, Anitha Nellutla, Jyothsna Ravi, Madhurima Charugundla, Ram Garipalli, Srinivas Garlapati and Swapna Aravind presented the event in a lively manner with wit and enthusiasm. Sri Ramchander Rao Naraparaju, MLC and leading lawyer from Telangana was guest of honor who spoke in length about the Telangana movement and the tasks ahead in building up the new state.

Sri T. Harish Rao, Minister of Irrigation, Government of Telangana sent a recorded video message and reminded about the role of NRIs in the fight for Telangana and praised GATeS for its activities.

GATeS conducted a fund-raising Volleyball Tourney to help Autism Society, Fire Department, Police Departments and Ocee Park. Trophies were given to the teams that excelled and Check were presented to the beneficiaries.

Within a very short period, GATeS was able to raise about $8,000 thru the tourney.

President Dr. Venkat Veeraneni welcomed the attendees and spoke about GATeS activities. He thanked scores of volunteers that worked tirelessly hundreds of hours over the past 3 months to make State Formation Day Celebrations memorable.

Dr. Sreeni Gangasani, Chairman of BOD explained the mission of GATeS and thanked all Sponsors for their belief in GATeS and supporting. Donors were felicitated and recognized by GATeS (Formerly Telangana Community, Inc – TCI) founding members.

Our Chief Guest attended from Telangana State Sri N. Ramachander Rao, MLC and Senior Lawyer, All India Barcuncil and Press Council member, Sri Srinivasan, Consulate General of India in Atlanta attended the event and reminded the audience about the Fund Raising event that GATeS held earlier this year and extended his support for future activities. Neelya Bhavani, movie artist was a special attraction at the event.