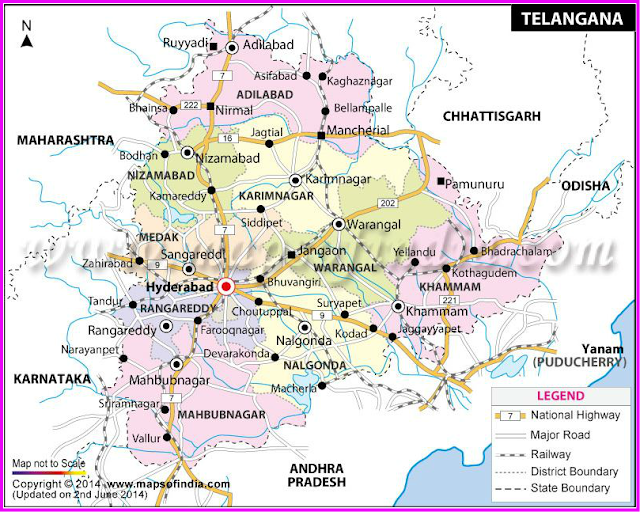 Nearly after one year since its formation, Telangana has finally gotten the physical map this afternoon. The Survey of India has officially released the map of Telangana, which was formed as the 29th state in the Indian constitution. The map consists of Telangana's bordering states and also the rail, road and airway routes from Hyderabad.

The Survey of India further revealed that Telangana is the country's 12th largest state. The map shows Telangana bordering with its neighboring states of Andhra Pradesh, Odisha, Chhattisgarh,
Maharashtra and Karnataka. River ways, district headquarters, museums, religious places and other tourist attractions have been mentioned on the map.

Stating that Telugu and Urdu are the primary and secondary languages respectively, the SOI also published the details of the Metro project and the state's population according to the 2011 census. The Survey of India also stated that they merged the seven mandals in the Polavaram region with into Andhra Pradesh.


Following is a list of the districts that will make up the province of Telangana:


History of Formation of Telangana

The movement to create a separate state of Telangana from Andhra Pradesh had started long back. There had been several movements but the most important ones happened during 1969, 1972 and 2009. Over the years, the movement only gathered a lot of steam.

The process of creating the separate state of Telangana was initiated on 9 December 2009 with a formal announcement from the Indian Government. However, as a mark of protest against this decision, MLAs and MPs from the Rayalseema and Coastal Andhra areas tendered their resignations.


Why is it called Telangana?

It is said that both the name Telangana as well as the language in circulation in the state has come from the words Trilinga or Trilinga Desa, which means the country of the three lingas. As per a Hindu legend, Shiva came down on three mountains called Kaleshwaram, Draksharama and Srisailam as a linga. These mountains basically acted as the borders of the region and are supposed to be situated somewhere between the rivers Godavari and Krishna. The word is also used in order to separate the Telugu- speaking region from the Marathi dominions and designate it as a part of the state of Hyderabad.

Why was Telangana created?

The supporters of Telangana have cited discrepancies and deprivation in many areas such as water resources distribution, jobs and allotments of budget as the basic reasons for creating a new state. The region used to contribute approximately 62% of the revenues generated in Andhra Pradesh. It has been stated that even though it had almost 69% of the catchment areas of both Godavari and Krishna, it received only around 19% of the benefit provided by the various irrigation projects. It has also been alleged that in majority of the years the state government did not spend the money allotted for the development of Telangana.

Professor Jayashankar has estimated that only 20% of government employees are recruited from the region. As far as the secretariat is concerned, the count goes down to around 10% and only 5% of the officers who lead various departments are from Telangana. He has also pointed out that in the 50 years of the state's existence, chief ministers from Telangana have served for only six-and-a-half years.

The proponents of Telangana have also pointed that the state legislature as well as the Lok Sabha has failed to honour the various agreements, promises and plans and this has left the state in a lurch of neglect, backwardness and exploitation.

These regions also saw some violent protest after the said announcement. As a result of all these, the Indian government was forced to put the process on the backburner on 23 December 2009. The Telangana movement, however, continued unabated in Hyderabad as well as other districts of the region.

However, the process began yet again on 30 July 2013 when the Congress party decided to plead with the Indian Government to create the new state of Telangana. It was decided that Hyderabad would continue to be the joint capital of both Telangana and Andhra Pradesh for the next decade. The process met with the approval of the Union Cabinet on 3 October 2013.

A Group of Ministers (GoM) draft bill on Telangana was approved by the Indian Government on 5 December 2013, following which the bill was submitted to the Parliament so that both the houses could vote on the same. The 15th Lok Sabha voted in favour of creating a new state on 18 February 2014 and the Rajya Sabha followed suit on 20 February 2014.

Pranab Mukherjee, the President of India, provided his consent to the decision on 1 March 2014 and the Gazette notification for the same was brought out on the same day. It was announced by the Indian Government on 4 March 2014 that the new state of Telangana would be created and hence it was formed on 2 June 2014.
Google maps Hyderabad India Map Mana Telangana Street View Telangana Telangana
Share
Tweet
Pin
Send
Share