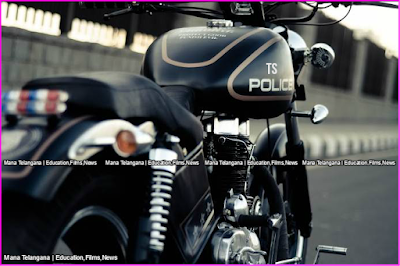 The Telangana government presented the state police with brand new Royal Enfield Bullets to improve the standards and also the public safety.


The Gujarat Police were gifted the high end Harley Davidson bikes, which actually changed the look of the police and added a fresh style to the department. Be it imitation or inspiration, the Telangana government had introduced the new Royal Enfield Bullets to the Telangana police.


After the formation of the separate state of Telangana, the government has changed the structure of the police department, by adding a trendy style to it. Most of the district police teams were already presented with Innova cars loaded with enhanced features. The government also insisted to install the CC cameras across several areas in Hyderabad.

“The traffic control and management will be improved on the lines of Mumbai-model, and also an integrated police complex, with a central police command, would be constructed on eight acres of land at Banjara Hills,” Telangana Chief Minister KCR assured. The officials are opining that, the modernization would help the police in controlling the crime and maintenance of law and order.

The government might have added the style to encourage the police department. Hope this encouragement will boost up the police and concentrate more on controlling the law and order in the city.
Bangaru Telangana Hyderabad Make In Telangana Mana Telangana Police Telangana police TS Police
Share
Tweet
Pin
Send
Share