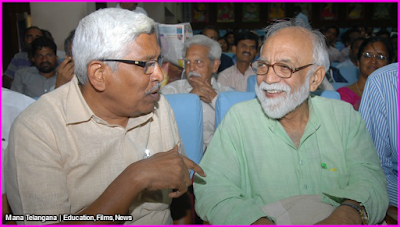 Renowned educationist Anil Sadgopal advised the Telangana government to lay emphasis on teaching the mother tongue, Telugu, to students rather than jumping on to the ‘English medium school’ bandwagon as part of its KG to PG free education programme.

Appreciating the government for conceiving the ‘free-education’ concept, he wanted the education system in the newest State of India to comply with ‘equality’ as advocated by the Constitution.

He delivered the Prof K Jayashankar fourth memorial lecture on ‘Corporatisation, Natural Resources and Education’ here Sunday. The Telangana Vidyavanthula Vedika organised the lecture on the occasion of the death anniversary of the Telangana ideologue. Speaking on the occasion, Sadgopal said: “Indian society is already riddled with caste, class, patriarchal biases. If education system in the form of multi-layered schools promotes the same, it is in utter violation of Constitutional norms. Common schools are the only way to deal with this.” Besides the need to lay emphasis on teaching mother tongue, he said the government should also consider education as a fundamental right rather than going by the ‘concept of selection’. “Providing education to all is a realisation of equality advocated by the Constitution. Hence, any student who wants to study any course should be given an opportunity. He should not be prevented from doing so by the process of selection,” he observed. According to estimates, only six per cent of tribal students, of the total inducted at the Class I-level, reach Class- XII. Similarly, only eight, nine and ten per cent of Dalit, Muslim and OBC students respectively complete schooling, he pointed out. Due to dilution of child labour laws, he said that nearly six crore out of 20 crore children in the country, in the age group of six and 14, were out of school.

A meeting organised at the Telangana Bhavan to mark Prof Jayashankar’s birth anniversary gave an opportunity for CM K Chandrasekhar Rao to meet his old friend, Balapochaiah, who had worked with KCR in the Youth Congress during their youth. Balapochaiah came to the Telangana Bhavan and stood among the gathering. While walking to Jayashankar’s statue, KCR recognised his friend and greeted him. As security personnel tried to keep Balapochaiah, KCR warned them and embraced his friend. KCR later introduced his friend to TRS leaders. KCR assured Balapochaiah of a respectful place in his party as the latter was ignored by the Congress.
Education High School Students Mana Telangana Telangana Culture Telangana Language
Share
Tweet
Pin
Send
Share