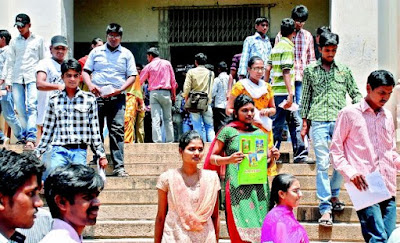 Eamcet results are out and the admission schedule for engineering courses was also announced by the Jawaharlal Nehru Technological University (JNTU), Hyderabad. But it is still not clear how many seats are available for qualified engineering aspirants at the counselling which is set to begin from June 18. Though the it is unlikely that JNTU would announce it before the counselling, officials say that around 74,000 seats are likely to be removed from the 1,74,000 seats in the state.

JNTU has already withdrawn its affiliation to around 143 private engineering colleges owing to their poor infrastructure and lack of qualified faculty. Following this, several other colleges have also come forward to reduce their intake by around 40,000 seats. Added to this, JNTU has recently conducted inspections for the second time in more colleges. This second round of inspection can lead to removal of more seats from several other colleges.

However, the JNTU would give a clarity over the seats only after the report of recent inspections is out. Based on the findings of report, the university will announce a fresh list of its affiliated colleges and submit it to the Telangana State Council of Higher Education (TSCHE) in June, the TSCHE officials stated.

A senior official of engineering admissions, Sanketika Vidya Bhavan, said, “JNTU is still working on it. Once the list of affiliated colleges comes out, we can figure out the number of seats. This will be over by June 18.’’