Jaya Jaya He Telangana: Mana Telangana school students are used to sing it in prayer 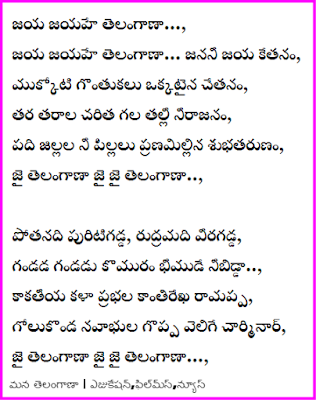 Much to the surprise of many, Ande Sri’s ‘Jaya Jaya He Telangana, Janani Jayakethanam’, which set the tone and tenor of the Telangana Movement, besides leaving an indelible mark on the hearts of people, has found no place in the textbooks released recently by the state government.

The song which was billed as the State song didn't even figure in the week-long Formation Day fiesta. The government had reportedly directed all the district administrations that only national anthem (Jana gana mana) and national song (Vandemataram) will be sung during the celebrations.

At the height of the Telangana Movement, people and teachers encouraged children to sing ‘Jaya Jaya He Telangana’ replacing ‘Maa Telugu Thalliki Malle Poodanda’. Even today children in many a school in the State are used to sing it. It was not exaggeration to say that even the websites of Google and the Wikipedia reflect that the song is the new State’s official song.

Support from all quartets and the Chief Minister K. Chandrasekhar Rao (KCR) himself and the Telangana Movement ideologue Prof. K Jaya Shankar are said to be big fans of the song, people thought that government would issue a GO according official status to the song. It’s been more than a year now; there was no official word about the song’s status.

What went against the song is a million-dollar question after the KCR himself had reportedly assured of according State Song status leaving many doubts among the people especially those actively participated in the Movement. There was speculation that KCR was not happy with the song as one of its stanza refers 10 districts of the state.

It may be mentioned here that the CM was in favour of creating 10 more districts. Which probably was the reason behind discarding the song.  “It left an indelible mark on the hearts of the people,” Dr Ande Sri, who took seven years to pen the song, said that he had no information about the status of the song.

Rasamayi Balakishan, the chairman of the Telangana Samskruthika Saradhi, told The Hans India, “Not just ‘Jaya Jaya He Telangana’, but there are so many songs like Ravella’s ‘Kadanana Shatruvula Kuthukalanavaleela’ - that echoed the streets of the region during the Movement.

The government will finalise only after a committee is formed to decide the State Song. Referring to the role of the poet-performers who lent strength to the movement with their songs, Bakka Judson, the TPCC secretary, said that some people close to KCR did not want to honour a Dalit poet, Ande Sri. It’s a grave injustice if the song that ignited fire among the people is not accorded State Song.
Education High School Students Mana Telangana Prayer Song Recent Telangana Students
Share
Tweet
Pin
Send
Share