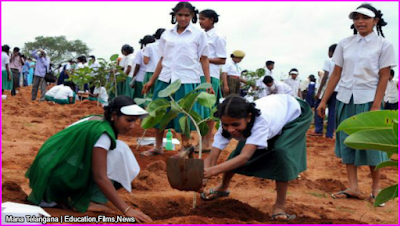 Teachers told to create awareness among students on plantation

Telangana Government’s flagship programme, Haritha Haram will be successful only when students work as soldiers and teachers enlighten them on the need of improving green environment.

Addressing the Balala Haritha Haram held at Rajiv Gandhi Auditorium here on Friday, Ms. Priyanka Varghese, the Officer on Special Duty of the programme, felt that students would listen only to teachers and they would take light of parents’ word at times.

There were lakhs of students, who are supported by teachers and hence, the programme to be held from July first week, would be of a grand success, she said.

With a great aim of correcting ecological imbalance, overcoming drought and reducing temperature, Chief Minister K. Chandrasekhar Rao had planned this ambitious programme, she said and expressed the hope that it would find solution to many problems beset in society.

For the well-being of the State and children, teachers should bring awareness among students, she added.

Ms. Priyanka Varghese suggested the authorities to make extra efforts to get the first position for the district in the implementation of the Haritha Haram programme.

District Collector D. Ronald Rose said that as the teachers invariably spent spend not less than seven hours with students.

Expressing the concern at the increasing temperatures, Superintendent of Police S. Chandrashekar Reddy vowed to plant one lakh saplings by the Police Department.