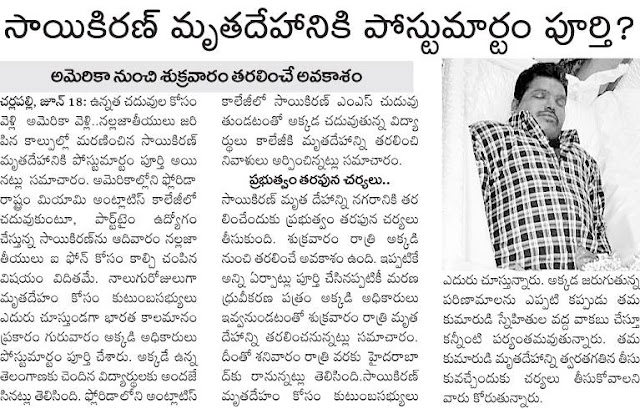 The body of a Hyderabadi student who was shot dead by unidentified people in US' Florida state a week ago reached his home here on Sunday.
The body of A. Sai Kiran Goud (22) was flown in here from New York via Mumbai.
Sai's flatmate Manoj accompanied the body, which was shifted from airport to his house in Kushiguda.

Telangana assembly Speaker S. Madhusudhana Chary and legislative council Chairman Swami Goud visited Sai's home and paid their last respects. A pall of gloom descended on the house as friends and relatives poured in to pay homage and console the family.

The last rites were to be performed later Sunday. After completing his B.Tech from a college in Hyderabad, Sai had joined a master's programme at the Atlantic University in Florida last month.
He was returning to his apartment in Florida on June 14 when a group of unidentified persons asked him to handover his iPhone. As Sai resisted their attempts, they shot him dead.