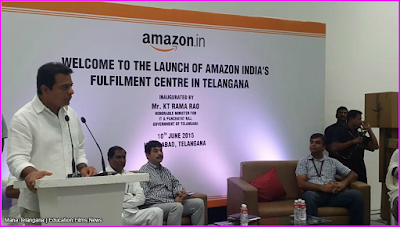 E-commerce giant Amazon may set up a centre for Amazon Web Services (AWS), its $5-billion cloud computing platform, in Telangana. Amazon is also planning to build its biggest campus outside the US in Hyderabad shortly. Besides, the state is in talks with the company to set up another fulfillment centre apart from the one that became operational on Wednesday.

“Land to the extent of 10 acre has already been allotted by the state government for the 2.5-million sft campus, while various other approvals, including a clearance from the ministry of environment and forests, have come through,” Saxena said, while declining to share the quantum of the investments that Amazon was infusing into its new campus.

The new FC will help SMBs in Telangana and nearby regions to gain access to and service customers across the country at low operating costs. It will also offer same day, two-day and Sunday deliveries as well, he said.