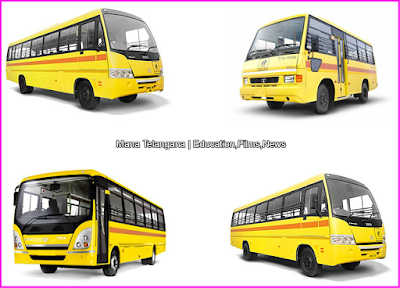 A total of 215 buses seized across the State since Monday. State Road Transport Authority (RTA) here on Tuesday booked 154 school buses in Telangana.

Cracking the whip on errant schools for not obtaining Fitness Certificates (FC) for their bus fleets, the State Road Transport Authority (RTA) here on Tuesday booked 154 school buses in Telangana State, including 18 in the city.

Prior to this, the officials seized 14 school buses on Monday in the city for running without FCs from the RTA. T. Raghunath, Joint Commissioner, Hyderabad district, RTA, said that of the 1,300 buses in the city, more than 1,100 got their FCs this year. He added that on Tuesday seven buses had also been seized during the raids apart from penalising 18.

Mr. Raghunath explained that buses are booked and penalised if there are lapses in them like lack of a first-aid box, wipers, attendant, emergency windows and other requirements listed by the RTA guidelines. “They are seized when they are completely unfit to transport children,” he mentioned, and added that the raids will continue till all the buses comply with the rules.

This year, keeping in mind last year’s tragic Masaipet accident, the RTA has also instructed all schools to provide details of the drivers and attendants who will be operating the vehicles, as a safety measure. In total, since Monday 214 school buses were seized in the State. “We will continue the drive till all the buses in the State have FCs,” said B. Venkateswarulu, Joint Commissioner, RTA.