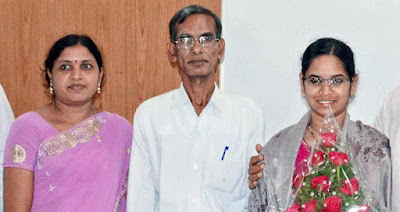 Telangana EAMCET-Medicine first ranker U. Priyanka hails from the sleepy village of Nagulapalem in Prakasam district. Having achieved a score of 160 in the gruelling test, she has set her sights on the prestigious All-India Institute of Medical Sciences (AIIMS).

Priyanka said this was a most satisfying moment for her, one that has made her more determined to aim higher. “I will crack the entrance test for AIIMS next month with full vigor,’’ she said.

Attributing her success to her parents, she said, “But for my parents, this feat would not have been possible. My father relocated to Vijayawada just so that I can concentrate on my education.”

In her SSC exam, she had scored a 9.9 grade point average and 98.4 per cent in the Intermediate examination.

Visibly happy with her success, her father U. Jagdeesh, a farmer, and mother Umalakshmi exuded confidence that their daughter would top the AIMS entance examination too.

Sixth ranker in EAMCET medicine, Pydi Tejeswara Rao also hails from a remote village, Pydipeta in Ranasthala mandal of Srikakulam district. His success put his villagers and family in a jubilant mood.

Tejeswara Rao said he anticipated a good rank but getting the sixth rank was a pleasant surprise. “My dream to serve the poor as a doctor is not far away,” he said.

His father Appa Rao said, “It is a proud moment for my entire family. A common man cannot afford to admit his child in a private medical college. But my son has eased my burden,” he said.

Seventh ranker Ponnada Naga Satya Varalakshmi, daughter of a registered medical practitioner, topped her performance in AP EAMCET in which she secured the 46{+t}{+h}rank. The girl from Dowleswaram has set herself the goal of becoming a cardiologist.

Elated, Varalakshmi too attributed her success to her parents Chinnachari and Saraladevi and to all her teachers. Majji Sandeep Kumar, a resident of K.L. Puram in Vizianagaram, secured the seventh rank in TS EAMCET engineering but has decided to study computer science at IIT, Mumbai.