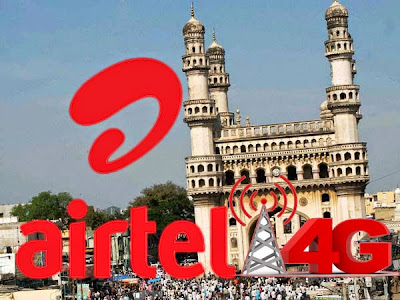 The facility was made available to Airtel users after the company signed Intra Circle Roaming (ICR) pact with other operators who had the license for providing the services in the state.Announcing the beta launch, Venkatesh Vijayraghavan, CEO – Telangana, Bharti Airtel (India), said the company had made significant investments in building a robust 4G network.

“We want our existing customers to be the first ones to enjoy the Airtel 4G experience and are offering them a free upgrade to Airtel 4G at the same price as 3G. We look forward to our customers’ valuable feedback towards delivering a truly world-class 4G experience for customers ”, Vijayraghavan said.

To avail of this offer, existing Airtel customers with 4G ready mobile devices can walk into any of Airtel’s retail touchpoints across Hyderabad and upgrade to a 4G SIM and “experience mobile Internet speeds like never before”, the mobile operator said.

Airtel has also announced go-to-market partnerships with Samsung and Flipkart to proliferate 4G devices and transition more and more customers to experience the fastest browsing experience.

In weeks to come, Samsung will offer bundled Airtel 4G SIMs, along with all Samsung 4G handsets available in the Indian market. Airtel 4G offers with double data benefits are now available for Samsung’s Galaxy S6, Galaxy S6 Edge, Galaxy A7 and Galaxy A5 mobile devices.

Samsung will also be looking at launching its all new Core Prime 4G mobile phone in Airtel 4G markets, the release said.

As part of a new partnership, Flipkart will be offering Airtel 4G with double data benefits for customers buying select 4G handsets.Earlier in April 2012, Airtel had launched India’s first 4G services in Kolkata. Airtel’s 4G services are now available across India, including Chennai, Bengaluru, Pune, Chandigarh and Amritsar.Bharti Airtel will also soon bundle its 4G sim with devices of brands like Xiaomi, Motorola, Lenovo, Asus and Huawei to be exclusively sold at Flipkart.