The Telangana state government is all set to finalise the state’s official flower, bird, animal and tree in a day or two. Proposals in this regard have been sent to Chief Minister K. Chandrasekhar Rao for approval.

All these have cultural, traditional and historical significance in Telangana. However, it remains to be seen whether Mr Rao approves of the proposals or suggests changes.

He held several meetings with TS government’s cultural advisor and retired IAS officer K.V. Ramana Chary and officials of the cultural department to shortlist the icons.

Though several proposals have been sent to Mr Rao since June 2, they were rejected as no consensus emerged in the meeting with officials.
Sources said fresh proposals were sent to the Chief Minister two days ago.

Officials said pala pitta was selected because in the Telangana region, there is a popular belief that sighting the pala pitta on the Dasara day is auspicious. Indian Bison was selected as it is widely found in forests of Warangal, Adilabad and Khammam districts. It is the tallest species of wild cattle and is a strong and massively built animal.

Ippa chettu was proposed as it is considered holy by tribal communities in Telangana. 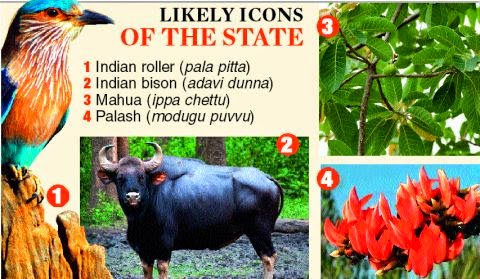